As we approached her due date, I was growing increasingly nervous about wondering why the baby wasn’t born yet. I thought I had a pattern of delivering by 38 or 39wks. Also, I had had many nights of rather rough sleep, at wk. 34 I’d had 4 nights of rather painful braxton hicks, and then again at wk. 38. So I was keeping in touch with my midwife about all my “false” labor. It was basically like braxton hicks, with pain across the upper belly, but no cervical pain or pressure. These would come about 5 or 6 an hour mostly at night, and then disappear all day. I didn’t consider it part of “labor” but looking back, it must’ve been.

So on the Lord’s day, (EDD EVE) My husband & I started the morning in love and went to church, we celebrate the Sabbath all day, so we were there until about 4:30. During that whole day, the bh were the same, coming about 6 per. hr. They were painless, but somewhat regular. So I called my midwife before we started the drive home to tell her. She was 6 hrs. away waiting for her sister to go into labor. So I had agreed to keep her posted on every little thing my body did so she’d have time to get to me when I started labor. She asked me to go home and time them and call her back.

On the drive home, I had a couple exciting contractions that actually seemed to be doing something low down instead of just high up and when I got home and timed them they were a pretty steady 7-9 minutes apart, still not painful or even uncomfortable. So my midwife decided to start the 6 hr. drive out to my house. I felt badly about her decision because I was afraid it was more “false” labor and it would fizzle out. But since I had called her, I felt obligated to call my sister too. I warned her it was probably false labor, but I just wanted to let her know. So she came over, and as soon as she got here, the contractions spaced out to about 5 to 20 minutes apart, lasting about 20 sec. and totally painless so I felt awful for “crying wolf”.

My midwife had made it halfway to me, when it fizzled out, and I advised her to head back to her sister’s house. My sister was stranded at our house until her husband could come get her the next morning. So since my sister was here, without her kids, we just made a ladies’ night of it, my 13 yr. old daughter joined us for a movie, we watched “Tower Heist” (not recommended, language), but it was fun, and we went to bed sometime between 11 & 12.

Well… at 4:30 am, I woke up to another yucky up high braxton hicks, and rolled out of bed to pee. As I was peeing, an interesting contraction with a little cervical sensation came on, and I had to poo. I stayed in there peeing and pooing and contracting for awhile, groggily wondering if today might be the day. I finally walked down the hall to my bedroom and had some more contractions with that low down feeling, so I texted my midwife to tell her I’d had 7 in the 4:30-5:30 hour. She called me back to hear my voice, and as soon as I had to try to talk through one, I had a crazy “grab the sink & moan” contraction. So my midwife told me she probably wouldn’t make it in time for the birth, and asked if she could send her back up, I didn’t care.

She wanted to talk to my husband. I just carried on peeing and pooing and contracting, and these were really painful to me. I couldn’t deal with them, I didn’t know what to think, I couldn’t visualize or pray, I just seized up in fear, and then I would hear my midwife over the speaker phone saying “just breath” so I’d do that until it passed. I realized I needed to get in the bath because I was about to birth, so I waddled over there and prepared to step in, while I told someone to put warm water in.

I quickly threw off my pjs and put on my wrap on black dress between contractions, and when I was about to climb in, my water broke! This was new to me, it usually doesn’t break until the pushing stage. So when that contraction passed, I got in and told whoever was in the room to turn off the light. (I think my husband, my daughters and my sister were there) as soon as I got on my hands & knees in the warm water in the dark, I had to push, so I just started pushing whenever my contractions were pushing. Around this time I heard my friends voice so I guess my husband, my 2 older daughters, my sister and my friend were all

there. So I pushed with each urge to push. There wasn’t any perineal pain or burning, just painful contractions. I felt the emerging baby with my hand. It felt like a big squishy water balloon with something inside. I thought it was so huge it must be the body. (I didn’t realize that at this time my husband was looking at my rear end and he could see the back of baby’s head with the cord around the neck, and he unwrapped it) I just kept pushing with contractions. I remember feeling like someone was jiggling the baby so I yelled “don’t touch the baby!” But they all said “We’re not!” So I guess the baby was jumping. I had a pause after the head was out, I thought I’d let the next contraction bring the baby out, but she was stuck, so I wiggled and squirmed and so did the baby, and she slid out with a huge push.

I reached around to pick her up and held her to my chest while I re-positioned myself into a sitting position. I sucked her nose and mouth out with my mouth and rubbed her back. When she started crying she cried loud! My friend was concerned about my bleeding and my placenta which hadn’t come yet, so she cut the cord which had long since stopped pulsing. My husband held the baby and announced her a girl while my friend asked me to kneel and push to try and release the placenta.

Then I lost sight, everything looked black and I could see a silver iridescent pattern of blossoming snowflakes floating all around. I could still hear & think, but my head was drooped and my speech was slurred. I managed to ask for my baby, they gave her to me, my arms were strong enough. My friend tried to explain that I should let her go until my placenta came out and the bleeding stopped. But I said “I’m smelling her, I’ll produce oxytocin to stop the bleeding & expel the placenta.” My friend didn’t argue and the placenta came out quickly. I slumped in the tub shaking and cold wanting to wait for my eyesight to return before moving.

When I could see again, I let my husband hold the baby while I got out and moved to the bed. My friend and my sister and daughters all helped wipe the blood off me and got a chux under me and an adult diaper on and in a couple minutes I was cozy under blankets with my nursing babe. I sucked a piece of placenta during the time when my friend was trying to help me with the placenta and at this point I was trying to drink laborade, still feeling really cold & shaky and nauseated. Then the after pains started coming. Wowza! They were as bad as “transition”.

So, then the back up midwife arrived.She weighed the baby and she was 10 lbs 14 oz, our biggest yet. Her head circumference was 14″ and her chest wad 15&1/2″. She was 21&1/2″ long. I don’t know why she’s so huge, I could barely hold any food down the first 21 wks, and we live on rice, beans, oatmeal, pasta, and other cheap foods. Anyway, she was born completely posterior as I feared, but the midwife only found one small interior tear too small to stitch (I don’t even feel it).

The midwife told me that bigger babies with chest measurements like hers usually get stuck and require assistance like forceps. So I am so thankful God delivered her safely. She was born at 6:35am so since I didn’t realize it was labor until sometime after 5:30 it was really fast. Her face was so swollen the first day she looked funny, but she’s lovely now. She had her 2 day check up today, she’s gone down to 10lbs 10 oz but she’s a great nurser so I’m sure she’ll be back up fast. She pees and poos like a pro and smiles and has a full head of black hair. We still don’t know her name.

Can you believe how good the Lord has been to me? It’s shocking! I REALLY don’t deserve His careful providence and attention, but I must believe He loves me. And I’m just amazed! 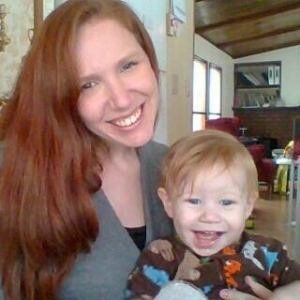 Click Here to Meet Kristi, the founder and developer of Wit’nLove Support & Services